An Interview with East London Waterworks Park
by J.D. Harlock

Local residents of the Hackney and Waltham Forest in East London have come together and established the East London Waterworks Park. This charity is dedicated to promoting a harmonious coexistence with the environment through community-led purchases of land that will eventually be returned to nature. Currently, they’re hoping to transform a local concrete depot into a ‘brownfield rainforest’ with wild swimming pools.

Today Nathan Miller, one of their trustees, has agreed to sit down with our Poetry Co-Editor J.D. Harlock for a chat.

SPM: Tell us a bit about yourselves.

ELWP: We are a group of East London residents of the boroughs of Hackney and Waltham Forest building a hopeful local response to climate crisis and biodiversity collapse. So far we are a group of workers, retirees, full-time parents, and carers with experience in architecture and design, project management, IT systems, gardening, social work, fundraising, and learning design. We have come together to transform a 5.68-hectare concrete site on the border of both boroughs into an urban oasis for nature and for people to explore, swim in, and enjoy. Like solarpunks, we believe it is important to try and create the future you want to live in.

SPM: Can you tell us more about this project you’re working on?

ELWP: East London Waterworks Park is a charitable company working to promote the protection of the environment by acquiring land for the local community and returning it to nature. We want to develop a space for people to connect and learn with nature. The process of the project is in itself an exercise in creating a hopeful local future. The site we are interested in acquiring was a set of working filter beds providing approximately 500,000 homes with drinking water in London between 1866 and 1971. They became redundant when a more modern waterworks site was established further north, and at this point, the filter beds were filled in and had concrete placed on top of them.

With what is best for the environment at the forefront of every decision, we want to uncover the filter beds lying just beneath the concrete slab and create pools for wild swimming. We want to crush the concrete into different grades to create habitats for invertebrates, then let nature take its course and create a mosaic of habitats teeming with wildlife. We want to develop a circular economy around the site using the nearby Lea Bridge Weir to produce clean energy to ensure a carbon negative site where waste is eliminated and resources are reused. And we want to refurbish the existing Victorian buildings to the highest environmental standards to give them a new lease of life as community learning spaces. We believe the only credible future for the site is one involving minimal development, a return to nature and open public access. Creating a thriving space for nature’s biodiversity and local human diversity where there is currently nothing but concrete, feels like a solarpunk aim. 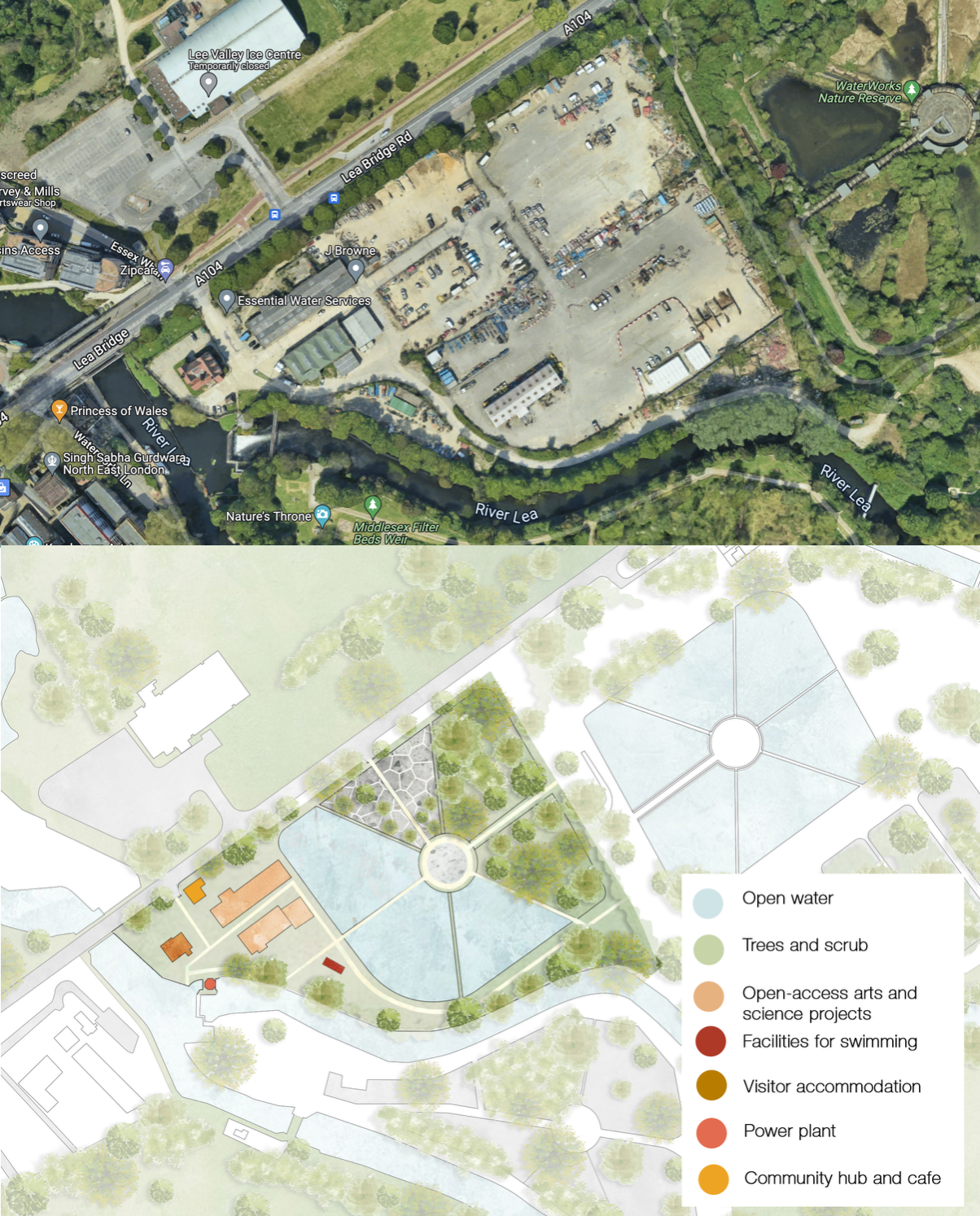 SPM: How did you get the idea to transform this site?

ELWP: In March 2019, Waltham Forest Council turned down planning permission on the Thames Water Depot site on Lea Bridge Road on the grounds of “inappropriate development” being prohibited on Metropolitan Open Land. Six months later, in September 2019, 25 people attended a public meeting to develop a hopeful vision for the Lea Bridge Waterworks. This vision is solarpunk in its process. It imagines a site as a space for nature to reclaim and also a space for people to learn how to live harmoniously with nature. The inspiration for the vision comes not only from the situation the land is in, but also its natural water features of the area. The tricky part of creating the wild swimming ponds will be providing enough water for swimming without creating water stress on local resources. 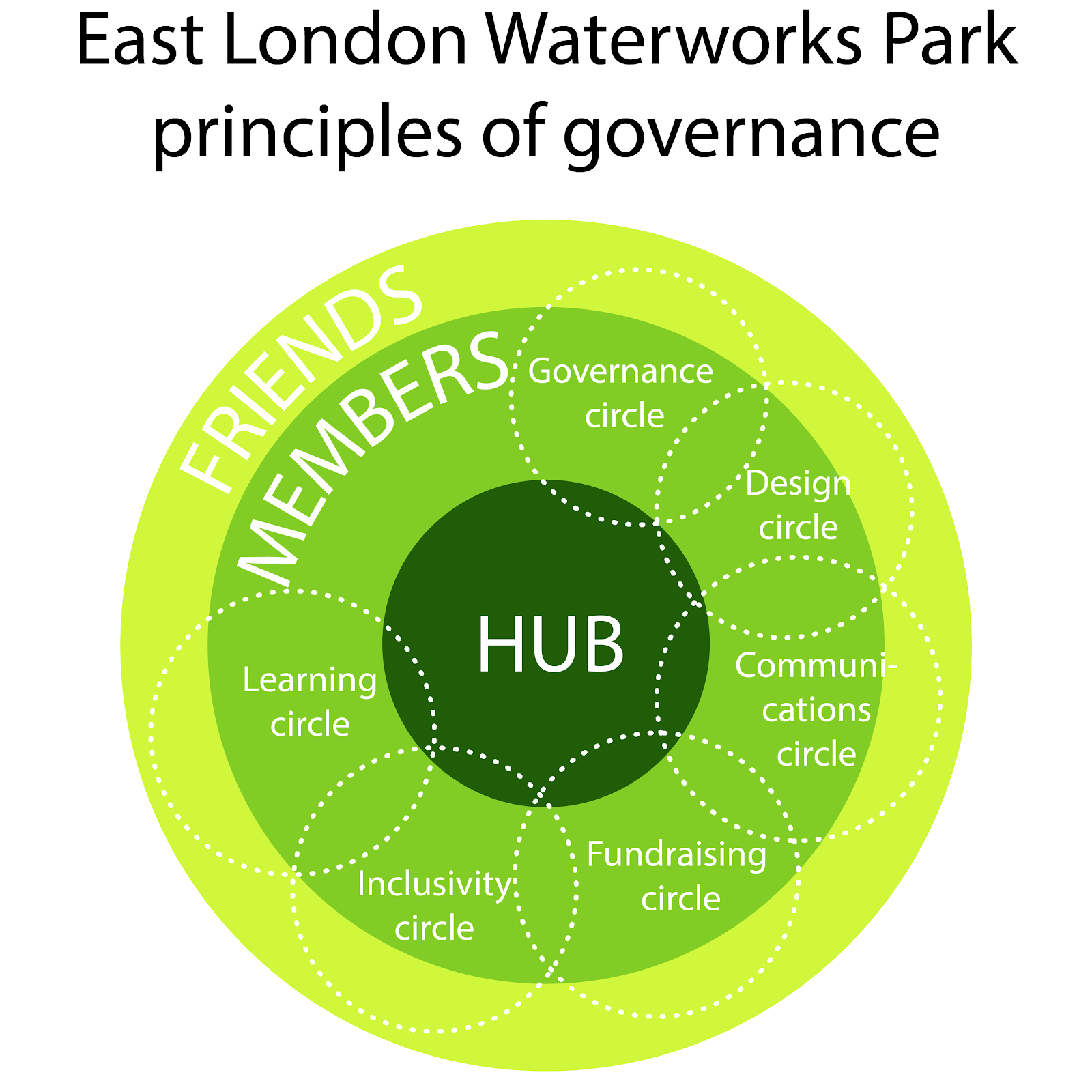 The process to build the vision out into a proposal and a wider project has itself been a learning experience. We wanted to create a psychologically safe environment while also being productive, so we decided we would govern ourselves by consent and sociocratic principles, rather than majority voting. Work is carried out by groups called “circles,” and circles make decisions by consent. There is consent when no one has a valid objection, ensuring issues are worked through collaboratively. We have six circles at the moment: governance, learning, inclusivity, communications, fundraising and design. In addition there is the Hub, which takes the final decisions and meets every two weeks.  The circles have their own work streams, meet at their own pace, and send delegates to the Hub meetings where the important organisation-wide decisions are made. We feel our ways of working embody solarpunk’s do-it-yourself ethics and social inclusiveness.

SPM: What steps have you taken so far to make the Waterworks Park a reality?

ELWP: We built our vision into a proposal whose first stage would be speaking to relevant professionals and the wider community. We wanted to value the land through a surveyor and test how feasible our design ideas were with civil and environmental engineers. We also thought it was important to engage the wider local community, particularly those often under-represented in conservation projects. Each of these elements required money. In February 2021, we launched a crowdfunding campaign which exceeded its target and raised £30,156; it was supported by 553 backers, each pledging between £1 and £5000. The campaign also received an additional £30,000 from a generous donor. We’ve been humbled by the level of local support and excitement for what started as a solarpunk act of imagination. For the last year we’ve been preparing ways to bring our hopeful proposal to life.

SPM: What has been the biggest challenge that you have encountered so far?

ELWP: Kim Stanley Robinson has spoken about the immense imaginative task involved in redirecting the inertia of our society towards addressing the climate crisis. Convincing people to attend weekly, fortnightly, or monthly meetings outside of work hours is hard, no matter the aim. However, for people who regularly joined our online meetings over the last year, we’ve found that working toward such an ambitious goal in the face of the climate emergency has been rejuvenating. The confluence of circumstances is too much of an interesting opportunity to let slip away: the landowner wanting to dispose of a former waterworks on Metropolitan Open Land, which cannot be developed on. Not only can we create a wild swimming pond for the human community but inviting back nature’s biodiversity is a local response to climate breakdown that residents can support.

SM: Can you talk a bit more about the circles of governance for this plan, and what exactly they’ve been doing to bring the Waterworks Park to life?

ELWP: Since the end of our crowdfunding campaign last spring, our six circles have been hard at work bringing the proposal closer to life, though we’re always looking for enthusiastic volunteers to join us. Having had the land valued by a surveyor, the governance circle has been working on the best strategic approach to enter into negotiations with the landowner and determine a fundraising goal to acquire the site. The inclusivity circle has been conducting a listening project to ensure under-represented perspectives are heard and everyone feels welcome within the project. In engaging with, and listening to, local community groups it has been developing a set of inclusivity principles that will guide the project forward. The design circle has been working with civil and environmental engineers to test the feasibility of our proposal, across everything from circular water and energy strategy to sustainable drainage and concrete reuse.

The communications circle has been working on a visual identity, redesigning our website and developing strategies to promote awareness of the project. The fundraising circle coordinates our fundraising efforts and is currently plotting our future public-facing campaigns and grant opportunities. The learning circle is working on ensuring that all learning experiences in and through the project and park adhere to our learning design principles, encouraging our local community to learn how to live harmoniously with nature. 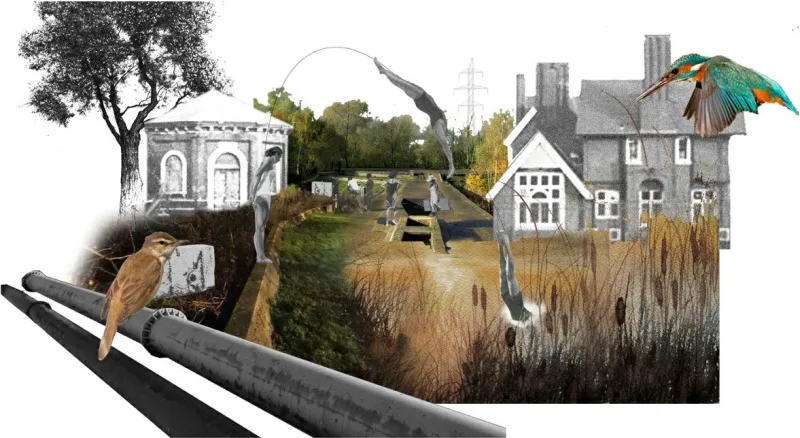 In addition to the joy and health benefits it would bring to visitors, the East London Waterworks Park would act as an example of environment-first, community-led land stewardship and could transform the way we think about our green spaces.

J.D. Harlock is an Arab writer/editor based in the Lebanon. He is the Poetry Editor at Orion’s Belt, the Poetry Co-Editor at Solarpunk Magazine, the Outreach Manager at Utopia SF Magazine, and the Social Media Manager at The Dread Machine. You can find him on Twitter @JD_Harlock.